Czech Republic could already count on Petra Kvitova and Lucie Safarova since few years, but now the country can also count on Karolina Pliskova. The young and talented Czech had such a great season and clearly revealed herself in 2015 reaching six WTA finals, including one title in Prague, making it as high as No.7 in the world in the summer, and winning the Fed Cup. Karolina is pretty, talented and young, many reasons to consider her as the future Czech tennis leader and star.

Karolina Pliskova already had a really good season in 2014, but this year she managed to confirm all her talent and potential. And if you look at the numbers, the 23-year-old Czech has clearly been under the spotlight this year. And there is maybe one number which shows it more than any other one, Karolina was the 13th most clicked player on the official website of the WTA in 2015. This reflect at the same time that the WTA wrote a lot of articles about her this season, but also that the fans were really interested to read things about her! Karolina is a WTA rising star and she already got a lot of attention in 2015, and it should be the same in 2016.

Another number, 517, that’s the number of aces hit by Karolina Pliskova in 2015. She topped the list for most aces on the WTA tour this year. That’s not a big surprise a many people consider her as a player with a big serve. But at the same time, she is not among the 15 fastest serves of the year, her strength is a mixed of power and accuracy, which doesn’t make her a player with a big serve, but with a great serve. Karolina Pliskova is not only good at this, she also have a lot of stamina and a real desire to play tennis… Indeed, Karolina played a lot this season, but she also won a lot. 53 wins in 2015, most match wins on the WTA tour in 2015 alongside Serena Williams and Angelique Kerber.

And the end of the season didn’t mean end of the year for Karolina, no. Less than two weeks after Zhuhai final and her great season in which she played 79 matches, more than any other player, she played 3 matches in the Fed Cup final and teamed up with Barbora Strycova to give the decisive point and the title to the Czech team. And as it seems to never be enough, after only few days Karolina Pliskova came to Asia to compete in the International Premier Tennis League (IPTL) with the Singapore Slammers, and guess what… she won it! The perfect way to conclude 2015 for the WTA rising star. And for 2016, no new resolutions, Karolina should still be a very busy girl as she will replace Lucie Safarova to play the Hopman Cup which is scheduled to be held between January 3-9 at the Perth Arena in Australia. Once again 2016 should be a busy year for Karolina, but it should also be a year full of success… so keep an eye on Karolina Plikova 😉 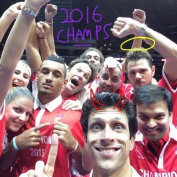