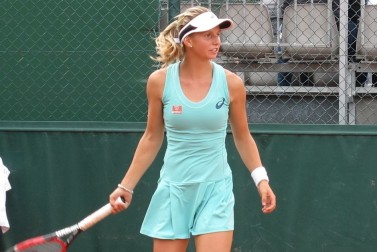 Born in Steyr, Barbara Haas is probably the most talented and promising Austrian tennis player. Currently 168th at the WTA ranking, she already won 10 singles titles on the ITF tour, including 2 this season in Naples and Port Pirie, and she just made her Grand Slam debut at Roland Garros. And for sure, there is a lot more to come for this still pretty young and talented player, because Barbara Haas definitely has the great state of mind to reach her goals and achieve some great success in the tennis world. So there is no doubt that you will hear more and more about her in the upcoming months and years… And whereas she is preparing the rest of her season, Barbara Haas has very nicely accepted to take a bit of her time to answer my questions to allow you to get to know her a bit more… 🙂

First of all, how did you get into tennis ?
My sister played tennis and therefore I also wanted to play.

How would you describe your playing style ? What are your strengths, and which compartment(s) of your game do you think you still need to improve the most ?
I would say constant and heavy from the baseline. I want to improve my aggressive game, getting in to the court, whenever I have the chance. And I would like to improve my serve too.

You already won two 25 000$ ITF titles this season, and just reached your career high singles ranking, I guess you’re pretty happy about that 🙂 How do you judge the first part of your season ?
I am happy about my first part of the season, the titles are great of course and also my grand slam debut at French Open went really well. So I am happy with that for now, but I’m always trying to improve my game, rather than just looking on END_OF_DOCUMENT_TOKEN_TO_BE_REPLACED

Yesterday in Bol, ITF 10 000$, the young Czech Garbiela Pantuckova won the 6th title of her career, the 4th one in Croatia. In the final, the player from Brno beat the number one seed Kathinka Von Deichmann 7-5 7-5. One week after she reached the final to see the success of her younger sister Magdalena in the final, Gabriela Pantuckova renews with success. Close to her career high singles ranking, we should continue to hear about Gabriela Pantuckova in the next few weeks… 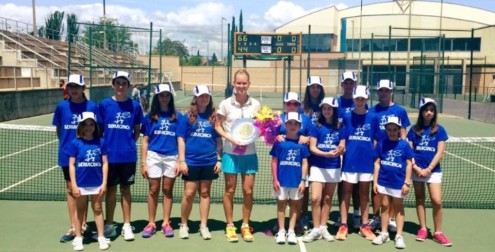 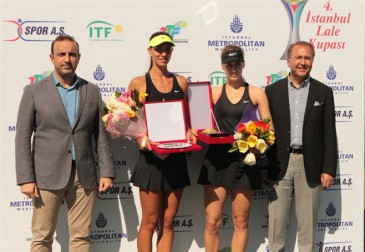 Born in Bratislava in Slovakia, Rebecca Šramkova, who already reached two semi-finals on the ITF tour this season, has very nicely taken some of her time to answer some of my questions. The 19-years-old Slovak is probably one of the most promising player of her country and this interview is a good opportunity to get to know a bit more this very talented and really nice girl. Almost every week passed on the tour Rebecca Šramkova is improving, so there is no doubt that you will hear more and more about her in the upcoming months and years…

First of all, how did you get into tennis ?
Actually I have problems with my eyes, that’s why and how I started to play tennis when I was six. It was good for me because of focus and being pointed on balls, but after a short time it started to be a passion for me.

How would you describe your playing style and what are your strengths ?
I play fast, with a good serve and drive volleys sometimes.

END_OF_DOCUMENT_TOKEN_TO_BE_REPLACED 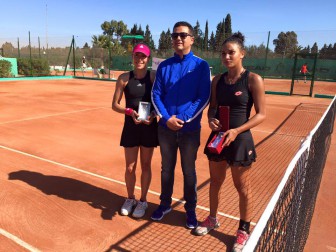 The 17 years old Czech Marie Bouzkova won in Cuernavaca, Mexico, her first ITF 25 000$ tournament on Saturday. In the final Marie Bouzkova beat the American Lauren Albanese 0-6 6-0 6-1. A really great achievement for the young Czech talent who has now won 6 ITF titles in her career, and already 2 in 2016. And with her motivation and potential, there is no doubt that it’s just the beginning for the player from Prague.

Indeed, Marie Bouzkova hasn’t only won the biggest ITF title of her career so far. The Czech is simply having an amazing start of the season. A final in Fort -de-France, her first title of 2016 in Petit-Bourg, and now this title in Cuernavaca. So what is the secret of Marie Bouzkova ? Well, I think it’s just that she is a really down to earth person with an innate gift for tennis. She knows what she wants, she does what needs to be done to go where she want to be, but never forget from where she comes. For all those who would like discover a bit more Marie Bouzkova, you can read this interview she nicely accorded to me last year. One year later it’s obvious Marie improved a lot her game, but she is still the same nice person. And after her today’s win she was obviously very happy, and you can see it from her messages on her social media: “Won my first 25K title!! Thank you for your support! I had great time in Mexico! ‪#‎pojď ‪#‎TOP300 ✔ ‪#‎TeamMary✨ ” 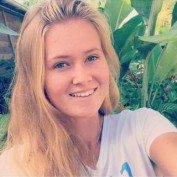 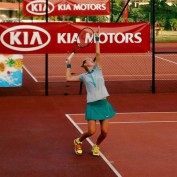