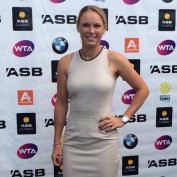 The German Fed Cup team has clinched a place in the Fed Cup final the last night after Angelique Kerber secured the decisive point in the semifinal against Australia in Brisbane with a 4-6 6-0 6-4 win over Samantha Stosur. It will be Germany’s first appearance in the Fed Cup final since 1992 when Steffi Graf, Anke Huber, Barbara Rittner and Sabine Hack won the title. The opponents in the final on 8 and 9 November will be the Czech Republic who beat Italy this afternoon Italy.

“It was a big step. I’m simply so happy and proud of my girls. They’ve been incredible,” said team captain Barbara Rittner. After Andrea Petkovic and Angelique Kerber had given Team Germany a 2-0 lead at the end of the first day, the German No. 1 had the chance to wrap up the tie early on. And Angelique Kerber took the chance in the duel between the teams’ top two players. Playing the former US Open champion Samantha Stosur, against whom she had never won, she was soon a set down. Playing better and better she, with nerves of steel, converted her first match point after 2 hours 14 minutes with an ace to give a place to Germany in the final of the Fed Cup by BNP Paribas.

“It’s amazing,” said Angelique Kerber who celebrated the win boisterously along with her teammates Andrea Petkovic, Julia Görges and Anna-Lena Grönefeld on the Centre Court in the Pat Rafter Arena. “We wanted the final at all costs. Now we’ve done it. It’s a very special moment for me and the whole team, It feels very great. I played a good match but it was a tough one because Sam was playing also very tough and I have never beaten her before. It just means a lot; it’s a special moment for all of us.”

The fourth singles between Andrea Petkovic and Casey Dellacqua was, in accordance with Fed Cup rules, not played. In the concluding doubles, Julia Görges and Anna-Lena Grönefeld lost 6-2, 6-7, 10-2 to Casey Dellacqua and Ashleigh Barty. Porsche Team Germany left Brisbane on Sunday evening local time via Dubai for Stuttgart where all four players will be appearing at the Porsche Tennis Grand Prix.