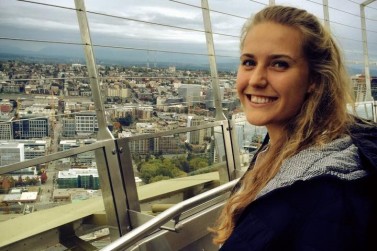 It’s not a big secret that I particularly like Antonia Lottner and closely follow her since several years now. And for this article I wanted to make a little focus on the beginning of her season. Everyone who closely follows the ITF & WTA tours knows that the player from Düsseldorf is a “must follow” player. She is talented, down to earth, has a lot of different weapons in her game, and simply bring so much joy on the tour with her always smiling attitude. The only thing that is missing to see her more on the WTA tour is probably a big performance on the ITF tour. But it could come quicker than we think…

So what happened to Antonia Lottner so far in 2016…? Well, what we can say is that it could have been better in singles, for sure. But we can always do better, and at the same time she reached a 25 000$ ITF semi-final in Grenoble, which is not that bad. And if you look closely, she is not that far from her career high singles ranking… What about doubles? It’s simply the best season of Antonia in doubles. She already won two ITF tournaments, including her first 50 000$ in Kreuzlingen in February, and a 25 000$ in Chiasso just one week ago. That’s the first time of her career that Antonia Lottner wins at least two doubles tournament in the same season, and there are still many tournaments to come this year.

The young German is working with Gerald Mild since more than a year now, and slowly but surely, the work is paying off. When I asked Antonia about how she is judging the beginning of her season, here is what she told me: “I had some good matches already, and I’m hoping that I can still improve my results, especially in singles. I’m currently working on everything to be more consistent.” She knows she can do more, and she knows how to reach her goals. That’s pretty positive I think, and she will have a great opportunity to appear in a WTA tournament in two weeks: “I’m playing league matches right now, and my next tournament will be the WTA tournament in Nürnberg.” That’s always great to play some big event to try to gain some more experience. And about league matches, Antonia and her team, the TEC Waldau Stuttgart 1 already beat the M2Beauté Ratingen 6-3 on Thursday. This first success included a big win from Antonia 5-7 7-5 10-8 against Michaela Krajicek. Next step now for our nice and talented German will be tomorrow against the Eckert Tennis Team Regensburg!