Karolina and Kristyna Pliskova became in October 2013 the first set of twins in history to win a doubles title on the WTA tour in Linz. Since this, the twins have won two more WTA doubles titles together in Hong Kong and Bad Gastein. A set of twins, but not the same success in singles for both, at least, not yet… On the one hand we have Karolina, who had an amazing last season, and she just broke the Top 20 last week after she reached Sydney’s final. And after a solid first round win at the Australian Open, Karolina is looking for more. And on the other hand there is Kristyna, who hasn’t reached yet her full potential and is still a bit in the shadow of her sister. But if she manages to stabilize her team, there is no doubt she will have the same success as Karolina is having.

Just before they arrived in Melbourne Karolina and Kristyna Pliskova have very nicely accepted to take a bit of their time to answer some of my questions about their off season, their expectations, their games and more… Let’s read their answers!

First of all, after a long season you surely enjoyed some well deserved holidays, probably a bit longer for Kristyna… How went your off-season ?
Karolina: The holidays were not long enough because my season ended relatively late. So I finally had only about ten days off from tennis. I spent one week in Dubai and also a few days at home. At least I managed to visit few friends. It certainly was nice, but short enough.
Kristyna: Yes, I had a bit longer holidays, but I just spent 10 days in the Canary Islands. Then I began with the fitness training for next season.

Karolina, you probably had the best season of your career with 2 more WTA titles and your best year-end ranking… For you Kristyna this year was a bit more up and downs but you still managed to win 2 ITF titles… With a bit of hindsight, how do you judge your 2014 season ?
Karolina: Yes, it was definitely my best season. Except two WTA titles I was also in the final three times and won three doubles titles, so I can be happy. Now I just have to prepare well for the next season.
Kristyna: There were a couple of hard defeats during the year and it didn‘t help. I lost a lot of matches in three sets. In Wimbledon I even had a match point against Shvedova… I’ve changed a lot of coaches, perhaps every three months. I had a weird period with Mr. Bedan, then I was with Jiri Vanek, who is now with my sister. I have to stabilize my team.

You both changed coaches this year… Did you feel the input of these changes in your game and results ?
Karolina: The cooperation with Jiri Vanek started in the half of season, but he worked with Kristyna before, so the change was fluent.

What are the advantages and disadvantages about having your twin with you on the tour ?
Karolina and Kristyna : Well, there are no disadvantages. It’s nice to have someone close with you, who knows tennis as well. It helps a lot especially when there is no coach at the tournament with us, we can even help each other during the match.

For both of you your serve is probably your best strength… but which compartment(s) of your game do you think you still need to improve the most ?
Karolina and Kristyna : We work on the footwork now. About our service we try to improve our percentage. But in tennis you can improve every part of the game again and again…

Who were and/or are your tennis idols, and why ?
Karolina: I have no tennis idols.
Kristyna: My idols is Goran Ivanisevic, because he was sympathetic to me with his style of game.

And to finish, if you could ask three wishes to the Genie, what would they be?
Karolina and Kristyna : Health for us and our friends and relatives. To play tennis as long as we want. And win one Grand Slam. 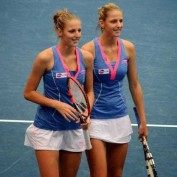 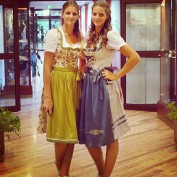